Prior to 1924, the first known golfing enthusiasts played near Dinham's Hill where there were a few makeshift holes. Keen golfers could be seen practising their swing, beginning somewhere near the boundary of the cemetery and hitting along a course towards what is now the Roadhouse.

In 1924 the District Council of Yorke Peninsula granted permission for The Ardrossan Golf Club to use the parklands for sporting purposes. The parkland area to be used was the fenced-off cliff top in front of the main part of town. It was a very basic course and there was no clubhouse so the players met after the game in a small tin shed where the present clubhouse is. It was originally 6 holes but was later extended to 9.

No. 1 tee was approximately opposite the end of First Street on the road edge, and No. 1 scrape in the vicinity of the hospital. The course then followed the cliff, crossed the road at the site of the B.H.P. houses, and went on towards what is now the town oval. It then turned back towards the cliff, and the last hole (No. 9) was on the seaward side of the cliff top, once again about opposite the end of First Street.

On 28th January 1927 an Annual General Meeting was held in the Ardrossan Institute. The decision was made to relocate the golf links from the cliff top to it’s present site in the parklands. Later in 1927 the new links were opened and a small clubhouse built.

The 9-hole course was situated in a picturesque area of the parklands just north of the town. A deep creek ran through the
course, necessitating a long hit at No.1. And again at No.8. This natural feature has proved both a “challenge” and a “terror” to
experienced and novice golfers alike. 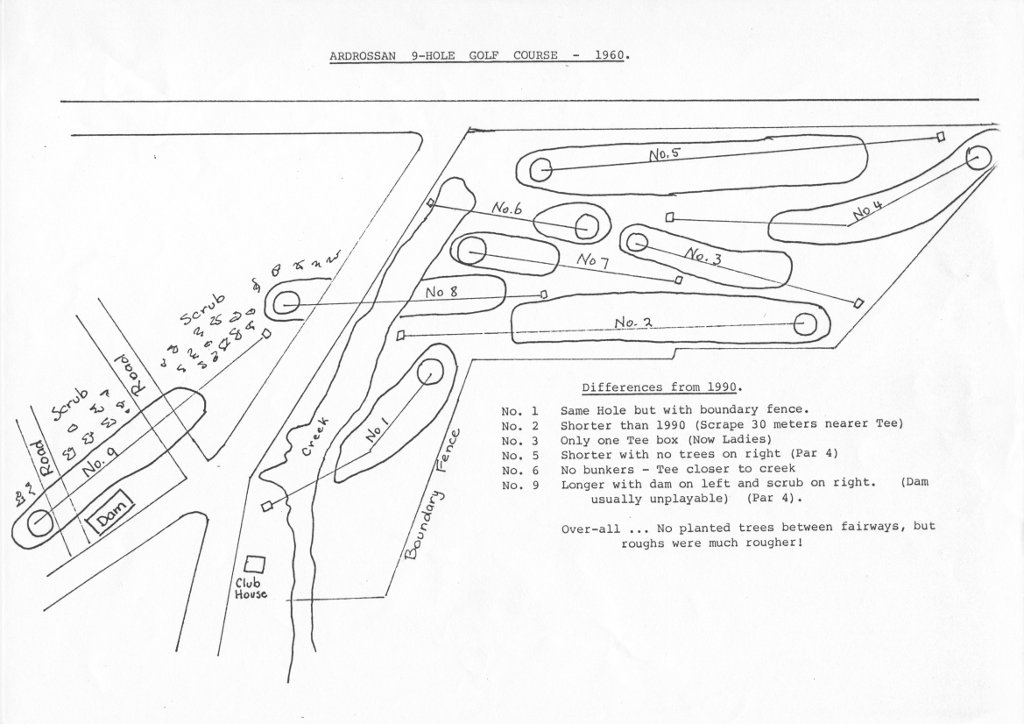 During the War Years (1939-45) those members who were still able and available, continued to play on Saturday afternoons, but most of the activities of the club were suspended until the end of hostilities. By 1946 many of the servicemen were returning and it was not long before moves were made to re-activate the Ardrossan Golf Club.

By 1960 the members of the committee were turning their thoughts to extending the golf course to 18 holes. They approached the District Council regarding the possibility of acquiring the scrub land adjoining the links on the opposite side of the road from the Clubhouse, and sought some professional advice on the possible lay-out of the new course. The golf club was able to lease the new land.

After golf one Saturday afternoon in 1961, a group of golfers were chatting in the Clubhouse about how nice it would be to have a bridge over the creek to avoid having to walk through the water/mud etc. Soon after a swing bridge was constructed.

By 1962 interest increased in the planned extensions to the course. A committee of five was appointed to proceed with obtaining exact
measurements and drawing up a plan with a view to obtaining as many holes as practicable. Land was purchased for three additional holes along the eastern boundary of the course. This strip of land is where holes 16, 17 and 18 are located. 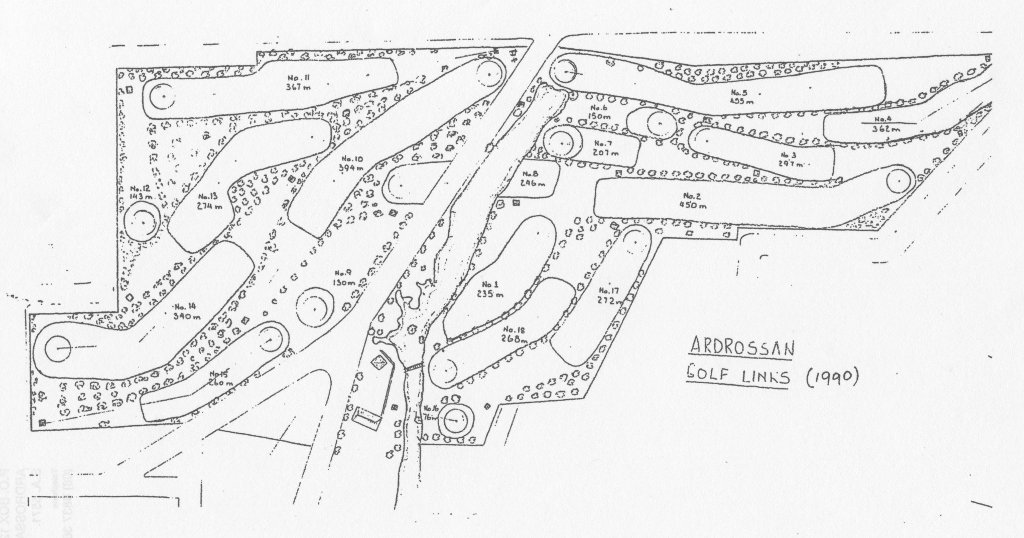 The next significant changes to the course came in the 90’s when it was decided to green the course using recycled effluent water. Three large dams were constructed along the creek to hold the water. Holes 7, 8 and 9 were altered to both utilise the extra space and remove the need for the dangerous hit across the road on 8. 7 was extended to a short par 4, 8 was shortened to a par 3 and 9 was extended to create another short par 4. These changes increased the par of the course slightly.

At the same time a water treatment compound was added in the triangle between holes 11, 12 and 13. The 12th tee was relocated away from its position behind 11 scrape to its current position today.

Due to increased safety and liability concerns the swing bridge was finally laid to rest after forty odd years of operation. It was at this time the creek in front of hole 1 was reshaped and greened to make it much more appealing and less treacherous.

The only other significant changes to the course in recent times was the seeding and watering of all tee boxes and some additional mounding and reshaping of scrapes.